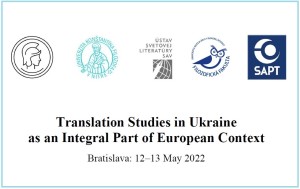 Anders Pettersson is an emeritus professor of Swedish and comparative literature at Umeå University, Sweden. END_OF_DOCUMENT_TOKEN_TO_BE_REPLACED The main focus of this thematic issue is to consider theoretical and methodological questions that are still open and to specify the perspectives that can be derived from them, all of which should in the end enable us to grasp the broad and dynamic spectrum of interrelationships between literature and knowledge in a new, different, or at least clearer way.

Please send abstracts for articles in Slovak, German or English to: usvlwlit@savba.sk; roman.mikulas@savba.sk and jan.jambor@savba.sk by January 31, 2022. Johannes D. Kaminski studied German and Chinese at the University of Vienna. END_OF_DOCUMENT_TOKEN_TO_BE_REPLACED Christopher Rundle is associate professor in Translation Studies at the Department of Interpreting and Translation of the University of Bologna, Italy. END_OF_DOCUMENT_TOKEN_TO_BE_REPLACED