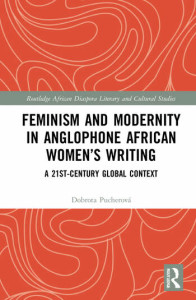 This book of Dobrota Pucherová re-reads the last 60 years of Anglophone African women’s writing from a transnational and trans-historical feminist perspective, rather than postcolonial, from which these texts have been traditionally interpreted. Such a comparative frame throws into relief patterns across time and space that make it possible to situate this writing as an integral part of women’s literary history.
Revisiting this literature in a comparative context with Western women writers since the 18th century, the author highlights how invocations of “tradition” have been used by patriarchy everywhere to subjugate women, the similarities between women’s struggles worldwide, and the feminist imagination it produced. The author argues that in the 21st century, African feminism has undergone a major epistemic shift: from a culturally exclusive to a relational feminism that conceptualizes African femininity through the risky opening of oneself to otherness, transculturation, and translation. Like Western feminists in the 1960s, contemporary African women writers are turning their attention to the female body as the prime site of women’s oppression and freedom, reframing feminism as a demand for universal human rights and actively shaping global discourses on gender, modernity, and democracy.
The book will be of interest to students and researchers of African literature, but also feminist literary scholars and comparatists more generally.